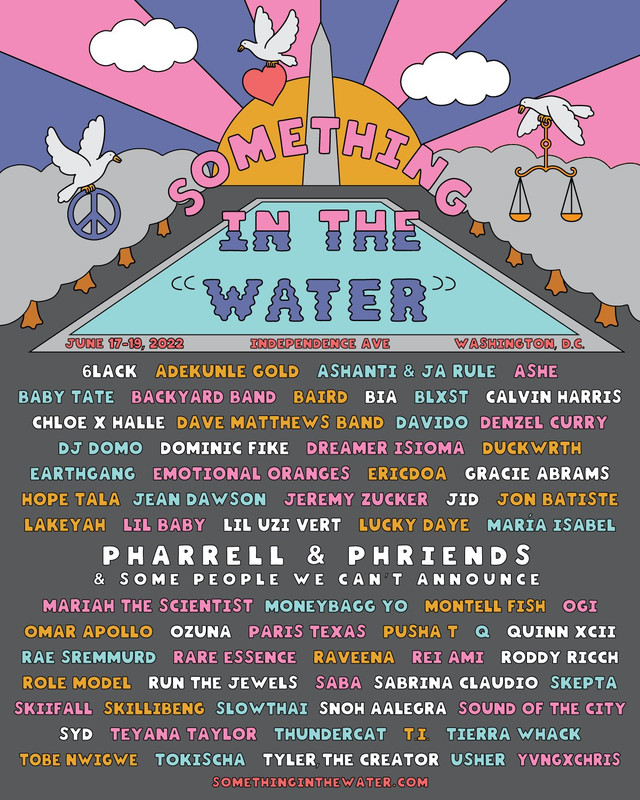 Pharrell and D.C. Mayor Muriel Bowser announced Tuesday that the Something In The Water festival will be held on Independence Avenue, on the National Mall, this Juneteenth weekend, June 17-19. Bowser promised “three days of excitement” as festivals return to the district.

The eclectic festival lineup includes Pharrell, Chloe X Halle, Calvin Harris, Dave Matthews Band, Lil’ Baby, Lil’ Uzi Vert, Run The Jewels, T.I. and Usher. The go-go musicians Backyard Band, Rare Essence and Sound Of The City also will perform. There also will be “some people we can’t announce,” organizers said. The mayor told reporters the district competed with other cities to host the major event, which officials hope will bring business and tourism to the city as part of its pandemic recovery plan.

“SOMETHING IN THE WATER is a Black solution (LOVE) for a systemic issue, and this year we are taking our celebration to a higher platform – the nation’s Capital during Juneteenth Weekend.  We want to show the world that there is SOMETHING IN THE WATER across the whole DMV,” Pharrell said in a statement about plans for the festival.

“If you’re celebrating music, if you’re celebrating Black excellence, if you’re drawing attention to the people who have dedicated their lives to knocking down barriers and uplifting our communities — then there is no better place to do that than in Washington, DC,” Bowser said in the statement. Something In The Water was previously held in Virginia Beach, but Pharrell said last fall that he was reluctant to hold it there again, citing a “toxic energy” that had run the city for “far too long.” Williams’ 25-year-old cousin, Donovon Lynch, was shot and killed by a Virginia Beach officer in March 2021. The city said he had pointed a gun at the officer who shot him. All Ballou students will get free tickets to the three-day event.