Nigel Sylvester: Ridin’ With That Work 2 With Pharrell 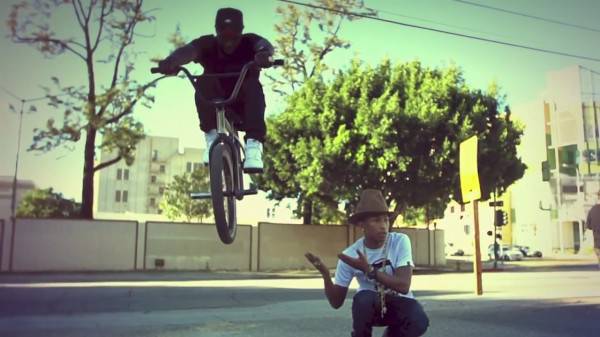 It’s no secret that Pharrell Williams has a huge infatuation with the BMX Culture, mainly Skateboarding, being a lifelong fan of the sport. Last spring, he joined BMX specialist Nigel Sylvester in downtown Los Angeles for a look into the history and their deep love for the sport.

If you remember last summer, Nigel took us through the streets of NYC in his pilot edition of Ridin’ With That Work. Now back for another installment in the Mixtape Series of vert and rail tricks, Pharrell gives a brief public service announcement before Sylvester begins Grindin’.

Nigel Sylvester – Ridin’ With That Work 2 With Pharrell

Nigel Sylvester – Ridin’ With That Work With Pharrell The man in that hat is as cool as you’d like; voice above a whisper but not much more, holding forth on the trouble with success, the absurdity of hit-making, on why people don’t feel anymore. Forty years on this earth, 23 of them creating the type of music that has soundtracked house parties, breathless and fumbling late nights, slow cruises through the neighborhood, and Pharrell Williams is still, remarkably, nailing it: Two global hits (“Get Lucky,” “Blurred Lines”) in 2013, which netted him four Grammys, including his second Producer of the Year award; another party-starter, “Happy,” showed up on the Despicable Me 2 soundtrack and won an Oscar nomination, as well as an award for the innovative 24-hour music video created for it.

But then there’s also the hat, and what it reveals about the taste-making gene Williams possesses. Last seen in Malcolm McLaren and the World’s Famous Supreme Team’s “Buffalo Gals” video in 1982, it’s a Vivienne Westwood piece that first appeared on the shelves of the shop she and McLaren owned in London. Now tweeted, mocked, and memed the world over, it’s almost as if Williams planned it. Which he’ll assure you he didn’t, because nothing Williams does follows a plan so much as appears to him at the right moment, ready and willing to be birthed into success. That includes his new album, Girl, his first solo project in eight years, which comes out March 3rd but will likely be firing our collective synapses far beyond that.

The Red Bulletin: What are you looking for when an artist walks into your studio?

Pharrell Williams: It is three things. It is, one, what they walk in saying they would like to do. It is also their energy that they just are naturally giving off. You know, whether it is a cab ride or it is an argument or something that they have on their mind. And then, third, it is the way that they actually sound and vocal tone. I always try to make sure that there is some interesting juxtaposition. So if your voice is like velvet and people are used to hearing you in things that would be conducive to a velvet voice, I would say let’s try gravel music, if that makes any sense. So there is some interesting alchemy there.

And the magic is when you are able to marry those elements together. Like, “Man, I didn’t know peanut butter and chocolate could go together.” Yeah, it is called a Reese’s cup. But you would never know unless you try.

So that is where I find the magic, in trying to just blend different worlds together and mix it up.

In pairing and trying, there seems to be no fear of failure whatsoever.

Do you fear failure at all? Because looking at your track record, you seem to be very consistent from success to success.

What do you mean?

Yeah, I don’t even understand that. My mind just can’t even process that.

Yeah. When you love something, what are you scared of?

I suppose you are scared of negative reaction.

Well, if you are thinking about fame and success, yeah. But who … Well, if you’re on top, I guess the fear would be losing that, right? Losing that touch.

Right. But if that is your main concern, being on top, then you probably should find another business. Because our business works off of emotion, and it is not really easy to quantify it outside of what it is.

So any kind of success that I have ever had on a song is not my doing. So you don’t do it for that, because I can’t control that. I do it because I feel like it feels good and it may resonate with other people. So it is not really good to mix the idea of what success is and the purity of why you do something.

Unless, define success. Big or huge? That means that after I have done what I did or anybody else that has made their contribution to something, success means the people voted, they requested, they shared it with a friend, they purchased it, they downloaded it. And they did it in large numbers.

That is what success means. I have nothing to do with that. I can’t control it. I can only control what I do.

When I was young, yeah, I looked at it differently, because I looked at a lot of people who quantified their happiness by how successful they were. And nobody wants to work really hard and not get recognized for it.

You want to be appreciated for your work. But that is a fine line in appreciating your work and it doing super well and you getting hooked on that. If you get hooked on success, you are screwed.

How did you manage to avoid that?

Well, I have been doing it for a long time, and I realized the thing that always gives back to me is my curiosity for how I can find new chord progressions, new sounds. That is how I am rewarded, because I can’t control anything else.

So when something is “successful,” that is what you guys always see me saying thank you for all of the time, or I put my hands together, because I want you to know that I know where it comes from, and point up.

You know, we are vessels. We are straws. We are not the juice. And anyone that believes that, those are the people that end up, you know, losing their minds later on in life or not happy.

You are the facilitator?

I am a part of it. I am a participant. The minute that you claim you are a facilitator, well then you are the all-powering. And are you? If everybody that made a song gained that kind of power, then I mean, what would this world look like?

That is why everything is fair, right? We all play a part in it. It is like an ant farm or a beehive. Everyone has their job. My job is to just listen and sort of try to channel it through, but it is coming from somewhere else, hence the term channel. So I am thankful when songs become what they do, because it is not my doing.

There are some producers out there who think it’s possible to manufacture hits; that a chord progression, that a certain hook sung by someone, will guarantee success.

Well, not unless you want to get in the rat race and compete with everybody else and hope that your song makes it to the top when it sounds just like everything else. Then yeah, but I like the different stuff anyways.

And you know what? I am not the only one. There are so many people that love different things. That is why I like the concept of a phone, you know—connectivity is a huge part of it, too. But where the device companies are really smart, they realize people wanted to customize things, because individuality is everything.

Your house smells like what you want it to smell like. It has been customized by you. Can you imagine where you wake up where there are only three furniture layouts for everyone’s home in the world? Yeah, it is funny; music is kind of like the only place where there are people that believe that delusion, that there is a formula.

END_OF_DOCUMENT_TOKEN_TO_BE_REPLACED 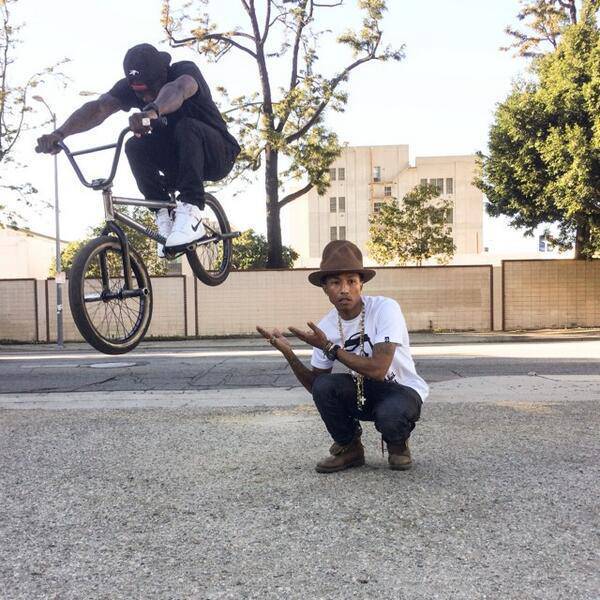 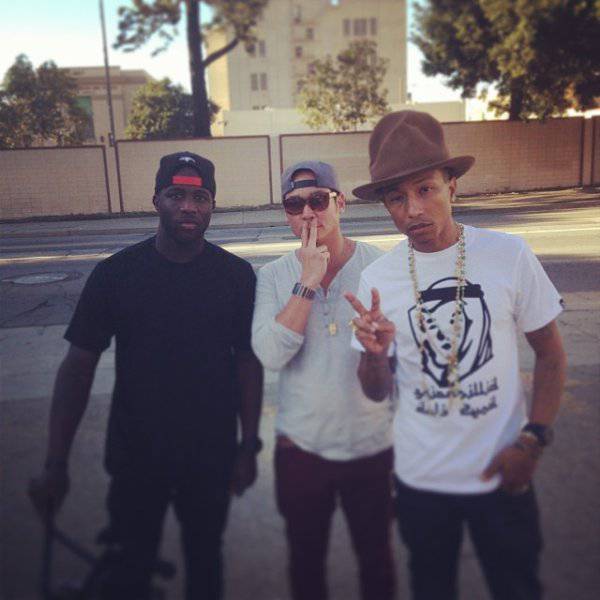 No matter where he’s headed, Nigel Sylvester stays moving. The pro-BMX rider recently tag teamed with chart-topping beatsmith/ creative visionary Pharrell for Brooklyn Machine Works, a collaboration that was born organically. “If you know Pharrell’s past, he’s not brand new to the whole bike thing,” he tells VIBE of the Head-Nerd-In-Chief.

“He has multiple videos where he’s actually riding on BMX bikes so he’s been embracing the culture for a long time.” The Queens-born BMXer also discusses being raised in Brooklyn, how he rolled around with A$AP Ferg before he became known for his “Work” and what he hopes to accomplish on his wild rides. Watch the interview above.

Who can forget Pharrell’s grand entrance during the 2013 MTV Video Music Awards? The baby-faced hitmaker biked alongside BMX star Nigel Sylvester and his crew down the red carpet towards the Barclays Center’s awestruck attendees. Since then, the two have embarked on a new business partnership. The Queens-bred rider sat down with Hot 97’s Angie Martinez to talk about what goodies will come from him signing with Skateboard P. 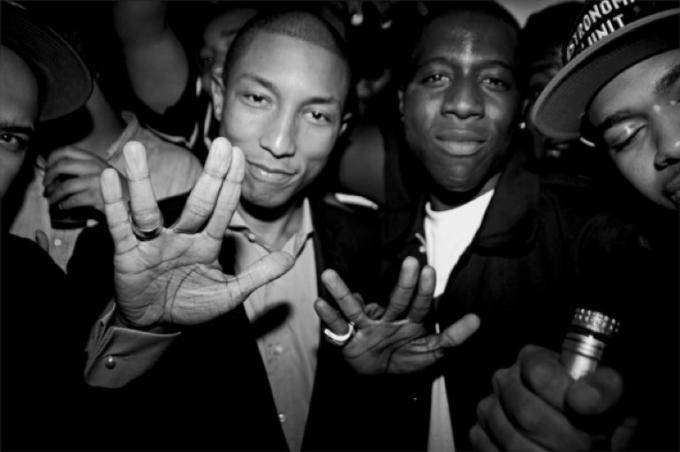 There was a reason why Pharrell and BMX rider Nigel Sylvester rolled up to the 2013 MTV Video Music Awards‘ red carpet on bicycles. The two seemingly random tandem have combined their respective genius to start a bike company. “Nigel Sylvester announced in his usual style last night about the bike company he is starting with Pharrell,” Animal Bikes founder/ CEO Ralph Sinisi said Tuesday (August 27). “It is going to be Brooklyn Machine Works complete BMX bikes … Of course, Nigel will continue to be one of our main team riders and run all our products with his frames.

The Brooklyn completes will also feature components from Animal.” It’s a good look for the Queens-bred biker and the highly sought after beatsmith as Nigel is a well-known hip-hop head and Skateboard P boasts a business portfolio that includes apparel, books and furniture. While no exact details have been released yet, Sinisi says to be on the lookout for the bikes in the near future. He adds, “Everyone knows Nigel has big plans and this is just a preview of what to expect.”

This week’s State of the Union address: Inspired by Nigel Sylvester’s bike game, Pharrell wants you to think outside the box when it comes to choosing a career. 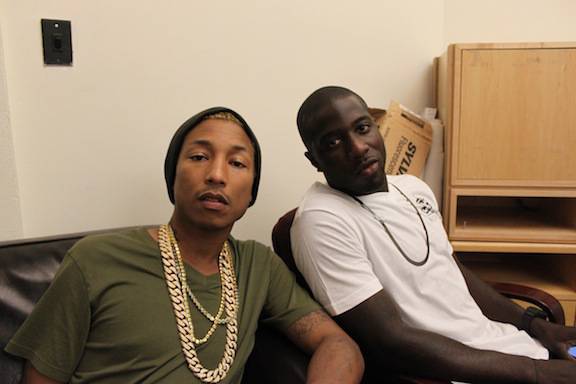 “Another amazing night in NYC. We tried to keep it as organized as possible but when Tyler, The Creator left the store it got a little chaotic. NYPD finally showed up to allow Tyler to escape and try to restore order but they did ask us to get Pharrell out of the store by 10PM instead of 11PM. Regardless we want to thank all of our customers for coming out and supporting the brand. Enjoy the pictures….”