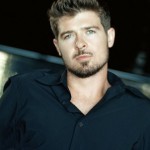 Vibe Magazine issued a statement today in response to Robin Thicke’s controversial interview last week, an interview in which the singer says he was denied the cover because he was white. In response to Thicke’s claim, the magazine says: “We have a great deal of respect for Robin Thicke and his music, and we remain flattered by his desire to be on a VIBE Cover. A VIBE cover is a huge milestone in any artist’s career—recent cover stars include Young Jeezy, Mariah Carey, 50 Cent, Usher, Senator Barack Obama, Eminem, Lil’ Wayne, and Robert De Niro, to say nothing of our 15-year history.

We wish Thicke the best, and we’re glad he discusses his thoughts on race and R&B in the new October 2008 issue of VIBE.” Regardless of transpired with Vibe, Thicke says “I respect that [their decision] because I live in a house with a black woman. I won’t use the word racism. I will say it’s a tough — but rewarding — fight. I look at Mary J. Blige, somebody who has had only a few pop hits and yet has changed culture, generated new sounds and inspired leagues of artists. She’s now a worldwide phenomenon. And it’s because of what she stood for; she never gave up.”
*singersroom.com