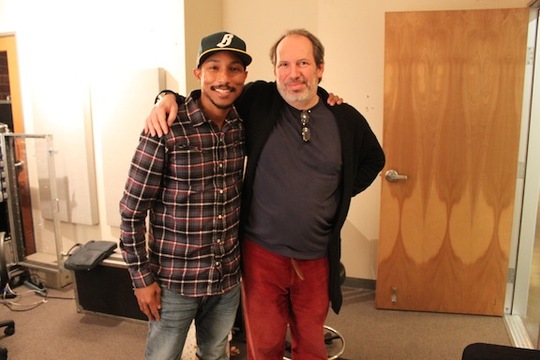 Effortlessly, If you can hum a tune, the website will do the rest. UJAM is a neat new website that was recently unveiled at the TechCrunch Disrupt conference in New York City. It transforms even the most basic tune hummed or sung into your computer’s microphone into a virtual masterpiece! Music giants Hans Zimmer and Pharrell Williams are backing the site, which will launch soon. The team behind it recently demoed the technology, which only requires a microphone and your computer.

Once you log into the site, you click record and you can start singing a song or humming a tune. You don’t even have to be on key. Once you’re done recording, the site will let you play back your music in a variety of ways – want a country twang, a big time musical score or a big band sound? It only takes one click of the mouse to transform your recording into a dozen variations. You can then share your creation with friends, family or the world! Making music has never been easier or faster, and you have to see – and hear it – to believe it. Check out the demo below for a sneak peek. Right now the website is taking applications for beta testers.

If you’ve ever heard a singer live who sounded nothing like they did on the radio, your first thought is probably to ask for a refund for the hours of your life that you wasted listening to something slightly more harmonious than a cat in heat. Your second thought might be “I could make better music than that.” And if you catch the eye of a prominent producer, with the right connections, perhaps you could. But if you don’t have 1. P. Diddy on speed dial, or 2. access to a small army of people with the talent to turn your off key humming into something worth listening to you might have a challenge on your hands. UJAM wants to change that. The founders have recruited heavy hitter music industry pros like composer Hans Zimer and producer Pharrell Williams (that’s one down), and developed software that lets you add backing tracks, audio correction and lots more with a few clicks (and, that’s two).

Essentially they’re seriously reducing the entry barrier to not just creating music, but creating good music, by removing the need for formal training. Whether that’s a good or bad thing is a matter of opinion, but the technology is pretty amazing in terms of simplicity and end result. They ultimately want to be part of other music technologies online, and allow people to share their creations socially. While they are still an invite only service, they eventually plan to offer a freemium model where a certain number of styles and sound effects are available for free with more professional options available for a fee.