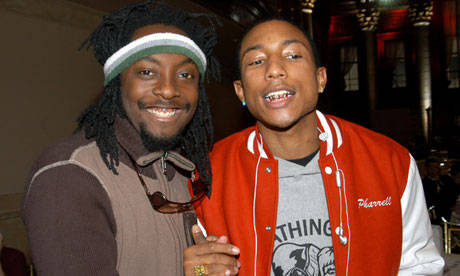 Will.i.am and Pharrell Williams have resolved their use of ‘I Am’ out of court. The pair were locked in a legal battle after the Black Eyed Peas star issued a cease and desist letter which demanded his Interscope Records label mate stopped using the phrase ‘I AM‘ in relation to his ‘I AM OTHER‘ YouTube channel., Pharrell hit back with a lawsuit in an attempt to protect his right to use the moniker – before will.i.am counter sued and claimed he has a copycat history. The ‘Scream & Shout‘ hitmaker cited the producer’s record label ‘Star Trak Entertainment‘, and that he also faces legal action from Marvin Gaye’s family for allegedly ripping off ‘Got To Give it Up’ for ‘Blurred Lines‘, his hit with Robin Thicke.

In his case, will.i.am also claimed Pharrell tried to register the trademark ‘Pink Slime‘, which he insists is too similar to ‘Slime‘, owned by toy manufacturers Mattel. However, the parties have informed a judge that they had reached an agreement and are in the process of drafting a settlement, according to The Hollywood Reporter. Robin Thicke – who co-wrote ‘Blurred Lines‘ – previously took legal action against Marvin Gaye’s family and insisted in his case that the tracks bore “no similarities” to each other. The lawsuit cited: “There are no similarities between plaintiffs’ composition and those the claimants allege they own, other than commonplace musical elements. “Plaintiffs created a hit and did it without copying anyone else’s composition.”