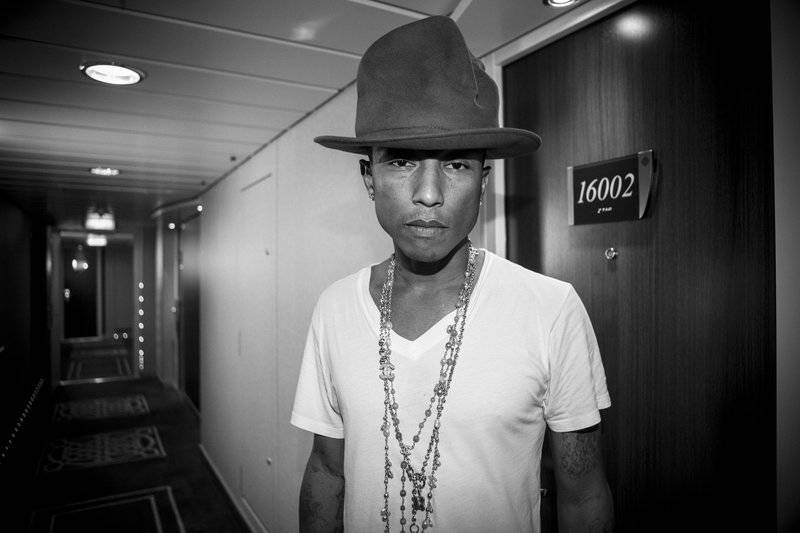 Welcome to the weekend of Pharrell Williams. In addition to his album’s release next Monday, and his date with the Academy Awards on Sunday night, the man of the moment can be heard in the upcoming World Of Red Bull commercial, airing March 3 onward. We’ve got an advance peek for you.

As for Pharrell, his second solo album, ‘G I R L’ (Columbia), is currently streaming in full over at iTunes Radio in advance of its March 3 release date. At 3 p.m. PT/6 p.m. ET that day, he’ll be hosting a Google+ Hangout, live from the Red Bull Studios LA. Be sure to check it out. I also managed to mix both versions of the beat together with Pharrell, Miley and Rhea, check it out below.

Game’s ‘When My Niggas Come Home’ ‘Making Of…’, Features Rhea On Vocals

Youtube user ‘UseYourBrain3’ uploaded a former video by Rhea when she posted some studio footage from back in 2010 when N*E*R*D were working on Instant Gratification. You can see on this video how The Neptunes have been working on Game’s ‘When My Niggas Come Home’, but according to the final product off the tune, I really doubt about ‘When My Niggas Come Home’ being a former N*E*R*D tune, anyways thanks to nerd0016, check out the studio footage above.

I’m not sure how this popped out on the internet, but its pretty dope. Here is the full version of Rhea’s Motorcycle tune produced by The Neptunes which was supposed to be on the upcoming True Crime: Hong Kong OST. I’m loving those drum kits they used on this tune, check it out below.

Previously:
True Crime: Hong Kong Is Back But With A New Name

END_OF_DOCUMENT_TOKEN_TO_BE_REPLACED

True Crime: Hong Kong Is Back, But With A New Name

There is hope that we still get the chance to hear The Neptunes produced OST of True Crime: Hong Kong! Square Enix picks up the game but not the IP, meaning it won’t be called True Crime. Besides announcing that the Guitar Hero franchise was being shelved for now, Activision announced back in February that it was canceling open-world action game True Crime: Hong Kong. But in what seemed like an inevitable move for a game that had so many years poured into it, it has been picked up by another publisher — Square Enix — and will carry a different name. The cancellation was surprising at the time; Hong Kong had been getting a new PR push just prior to the announcement. Activision claimed it was due to the game’s quality — or lack thereof.

It said both the Hong Kong and Guitar Hero moves were due to “the desire to focus on the greatest opportunities that the company currently has to create the world’s best interactive entertainment experiences.” This was reiterated in a recent interview with CEO Bobby Kotick, who said the company’s focus on fewer titles is about a “commitment to excellence.” He also described the goal with Hong Kong as being the creation of a less violent Grand Theft Auto game. “And we recognized that after giving it a good college try for three years we didn’t have the skills at the company to do that type of game, so we canceled it,” he explained.

END_OF_DOCUMENT_TOKEN_TO_BE_REPLACED

According to ASCAP, she’s just been given the Natasha Ramos/Ashanti track “Deeper feat. Robin Thicke” for her album.

Here is a much better quality of Rhea’s new band Jealous Lover ‘My Motorcycle’ performance which will be available on the Game ‘True Crime: Hong Kong’ next year, you can get below the mp3 of the performance, thanks to Tha_G.

Pharrell Talks About Rhea, Jealous Lover To Drop A Mixtape, Talks About The Mc Donald’s Video

Pharrell talks about working on Rhea’s band Jealous Lover and having 4 songs already finished but they’re planning 6 more for their album and he also revealed that Jealous Lover are planning to release a mixtape soon.

Pharrell: ‘Rhea’s Still Featured In Certain Places On The Record’

Currently the band’s only North American date in the run-up to the release of September’s Nothing, NYMag caught up with Pharrell Williams backstage. While Chad Hugo, his bandmate and partner in inactive production super-duo The Neptunes, sat next to him quietly, Williams sold us on the album: “We wanted to make it like a lifestyle. Lifestyle music. [And] girls can get freaky to it.” Also, somehow: “Most of the album is like the Doors meets America.” (He’s not joking, we don’t think.) And whatever happened to Rhea, we asked, a female vocalist the band briefly added — à la the pre-megafame Black Eyed Peas and Fergie — before returning to the original lineup?

“We experimented with it. That was our first batch of records, and it was good, but wasn’t good enough, and we were like, ‘Naw, let’s not do this.’” There’s no bad blood. “Rhea’s still featured in certain places on the record, but the members of N*E*R*D are Shay [Haley], Chad, and myself.” The Neptunes produced a ridiculous number of hits throughout the early part of this decade, often with Pharrell himself out front on the chorus. Which leads to two questions: Why the pause in producing? And why hasn’t N*E*R*D ever found the kind of chart success Pharrell and Hugo have repeatedly helped others achieve?

On the first, Pharrell says: “I didn’t want to keep producing the same stuff. With Nothing, I’m back to producing a whole bunch of new sounds, and it took a minute for something to dawn on me, to hit me.” And for the second question? “I always go too creative on myself,” Pharrell says, “and subject my band members to my wanting to forge the new path. For pop, there’s a process. It’s got to go through so a 6-year-old can get it like a 60-year-old. Our album now, if you fuck with N*E*R*D, you will love it, but it’s different juxtaposed to your average pop act, like your Jay Sean. It’s just too real.”