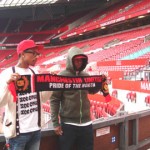 It’s not every guy who can carry off a hot pink jumper matched with a fluorescent yellow jacket, is it? But international rap megastar Pharrell Williams is something of a style icon – so he can get away with pretty much anything. Those daring fashion pieces are just part of the latest collection for his out-there clothing ranges, Billionaire Boys Club and Ice Cream. A side venture for the hip-hop star – who has collaborated with the likes of Madonna, Justin Timberlake, Beyonce and Jay Z, to name but a few of his celebrity mates – it’s very down with the kids, don’t you know.

Not to forget plenty of the bling-loving footballer set, including Manchester United’s Wayne Rooney and Rio Ferdinand who are both said to be fans of the funky label. Big t-shirts, baggy jeans, and oversized trucker caps are all part of the look. But with crazy patterns and bold mixes of almost fluorescent colours. In Manchester to launch the label’s latest collection at cool men’s clothing boutique Life on Old Bank Street, the singer revealed the thinking behind the range.”For me, making the Billionaire Boys Club was like Willy Wonka taking over Ralph Lauren,” he says. Well, that explains those neon pink jumpers. 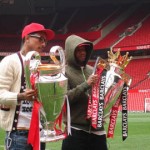 And as for the target customer? Will they be wearing this zany look in Wythenshawe? “It’s for cool people,” says the kooky star. “It’s a crew we make clothes for. “Our mantra is wealth is of the heart, the mind, and not the pocket. “Some people say we are pricey but our mantra has nothing to do with price.” Easy to say when you are a multi-millionaire, whose t-shirts go on sale from around £65. But is it a look that every guy can try? Life&Style took two lucky competition winners to meet Pharrell at the Life store bash, to see what they would think after being given a Billionaire Boys Club makeover.
*manchestereveningnews.co.uk